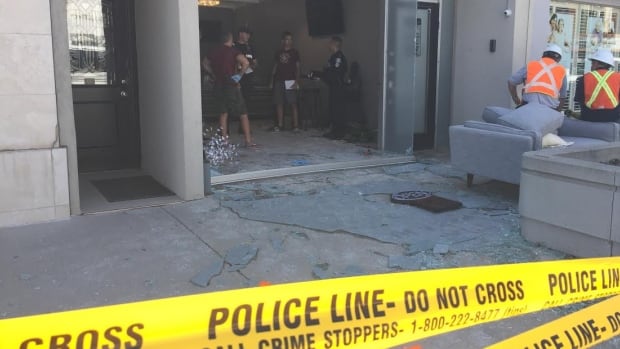 A Toronto police officer talks to Office of the Fire Marshal investigators inside Tweeder Medicinal after an explosion at the marijuana dispensary injured a man on Friday. (Chris Glover/CBC)

Toronto police say a man burned in an explosion at a midtown Toronto marijuana dispensary was among those charged in a large-scale raid of pot shops in May.

Toronto police spokesman Mark Pugash said Saturday that a 29-year-old man injured in the blast had been charged with two drug-related offences in the spring. He faces a count of possession for the purpose of trafficking and possession of proceeds of property obtained by crime.

Tweeder Medicinal was not, however, one of the 43 raided by police on May 26 in the bust known as Project Claudia.

The man suffered serious burns in the explosion Friday and Pugash said he remains in hospital. He arrived there in non-life-threatening condition, according to police.

No one has been charged following the explosion Friday night, which was so powerful it pushed a couch out of the dispensary’s window. 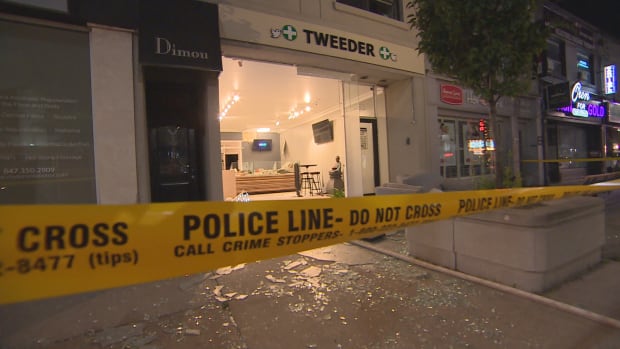 The blast shattered windows and pushed a couch outside the empty frame. (CBC)

Investigators with the Office of the Ontario Fire Marshal remained at the scene Saturday, but have not yet discovered the cause of the explosion.

Ward 22 Coun. Josh Matlow confirmed Saturday that he asked police to investigate the store after a resident expressed concern. He said he also met other residents after learning of complaints.

And a group that advocates for medical cannabis dispensaries has already begun to distance itself from the explosion.

“The Toronto Dispensary Coalition strongly condemns Tweeder Medicinal for putting their patients and neighbours at risk by engaging in dangerous activity,” a statement from the group said. “Any activity in a dispensary, other than the safe distribution of product to patients, is not in line with the 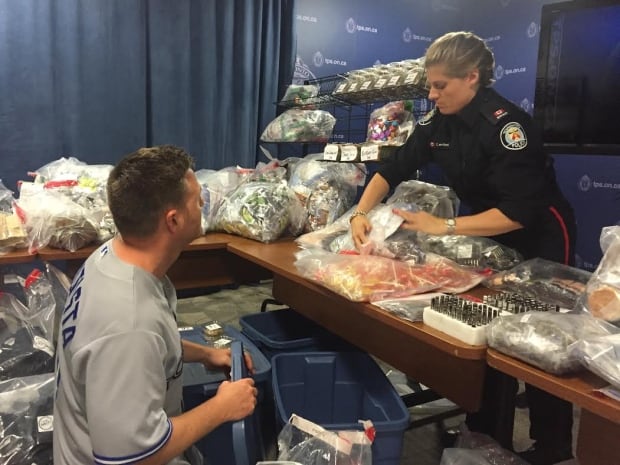 Olga Fowell, a Toronto resident who lives near Tweeder Medicinal, said residents have been concerned about the store for some time.

During the Project Claudia raids, police arrested about 90 people and laid 186 charges under the Controlled Drug and Substances Act. They also laid another 71 charges, including multiple counts of possession of proceeds obtained by crime. 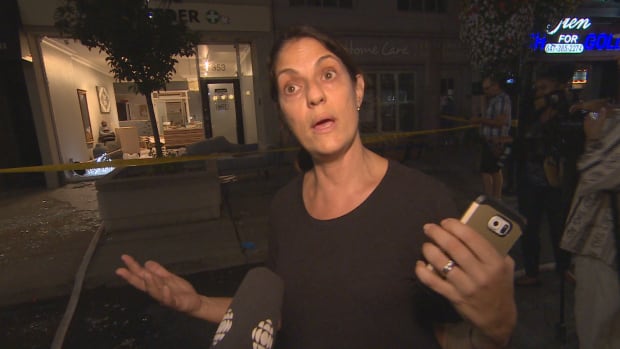 Area resident Olga Fowell says the store had a sign in the windows saying it was selling vapers and glassware. (CBC)

With files from Chris Glover.

To see this article in its original form, please visit: http://www.cbc.ca/news/canada/toronto/marijuana-dispensary-explosion-injured-man-project-claudia-1.3729463