Vote means any move to turn historic building into a retail space are on hold for now. 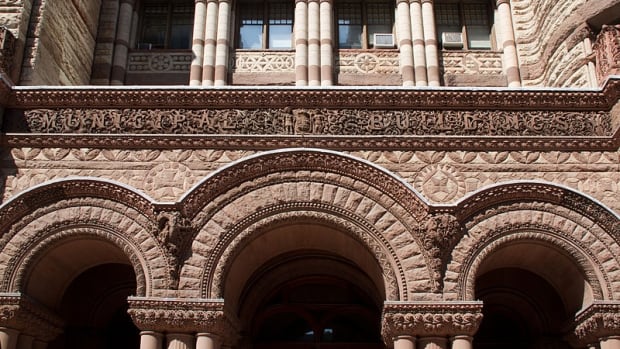 A city committee is looking at possible future uses for Toronto’s Old City Hall. The building is currently being used as a court house but the lease with the province expires in 2021. (Tony Hisgett/Wikimedia Commons)

Those who feared Toronto’s Old City Hall would become a new city mall in five years can breathe a sigh of relief.

The city’s Government Management Committee voted Monday to study the feasibility of turning the historic building into a city museum, before examining any other options for future tenants.

The building, which opened in 1899, is currently in use as a courthouse by the government of Ontario, but that lease will expire at the end of 2021.

The committee examined options on Monday for future tenants of the building once the lease with the province expires.

City staff had consulted with a real estate broker, who concluded that the best use of the space would be “conversion to a retail centre that contains a mix of food service, leisure, event and civic uses.”

The real estate broker’s report had many city-watchers fearing the historic building might be turned over to a retailer with plans to transform it into something resembling a food court.

But Monday’s vote means the city will first look at bringing a city museum to the space.

Toronto historian Bruce Bell would love to see the space become a museum, something the city currently lacks.

“Toronto has archived buildings all over that are just full of our history that’s never seen by the public,” he said. “To have an actual place where we can start displaying our great history, what a more magnificent setting than the beautiful city hall?”

Coun. Josh Matlow is among the many ardently against anything that would resemble a mall.

Please RT if you support A City Museum at Old City Hall, not another Shopping Mall. #topoli #NoMoreHeritageTaxidermy http://t.co/EdA5oWN7ny

Saying that what’s at stake is not “just any old building,” he’s hopeful the city can find a way to convert it into a space that highlights the best of the city, with a mix of local shops and a technology incubator.

Galbraith admits there will be obstacles. He said the building will require extensive renovations, which may force the city to recover those costs through opening it up to retail uses.

He’s seen similar restoration projects go awry in Toronto but hopes that in this case people will hold the city to strive for something special.

“We’ve done so many things wrong with historic preservation in this city,” said Galbraith. “I hope the eyes of the city are on this so we don’t mess it up.”

This article can be found in its original form at: http://www.cbc.ca/news/canada/toronto/old-city-hall-future-1.3256838