A pair of council members want to see a city museum included in any future redevelopment plans for Casa Loma.

In a letter released Thursday, Councillors Josh Matlow and Joe Mihevc say they want to see the castle continue as a tourist attraction as well as a venu for corporate events and movie shoots.

But they also want a city museum as part of a package that could include a mix of businesses, including restaurants.

Toronto currently does not have a museum large enough to showcase its vast collection of historical artifacts. Instead, they are tucked away inside a series of warehouses.

“I think it’s time that we finally celebrate, protect and share our city’s history in a building that is just as iconic and historical,” Matlow told CBC News. 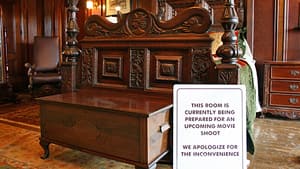 Casa Loma is currently in use as a tourist attraction but also plays host to movie shoots and corporate events. (Kimberly Gale/CBC)

Matlow acknowledges that any Casa Loma proposal must include ways to generate revenue to cover the castle’s sky-high operating costs. Casa Loma already faces a repair backlog of about $20 million.

At its Oct. 2 meeting, council will decide whether or not to move ahead with a request-for-proposal process.

Trelawny Howell is the great grand-niece of Casa Loma builder Sir Henry Pellat. She’s keen to see the castle restored to its former glory and likes the museum idea.

“It’s been very sad through our family’s history that it’s never been properly restored back to what it was before,” she told CBC News on Thursday. “Let’s revive it back to the magnificent castle that it once was.”

A Toronto museum is just one of the ideas being proposed for Casa Loma. Others include restaurants, retail shops, even condos.

Matlow is hoping council can find a way to keep Casa Loma open to the public while adding a museum component — all in a package that can pay for the castle’s substantial bills.

“I think this is something that will be supported by those who love our city and want to share our story,” he said.

To read this article from its original source, please click here.