CTV News: Speed limits to be reduced to 30 km/h on some Toronto streets

CTV News: Speed limits to be reduced to 30 km/h on some Toronto streets 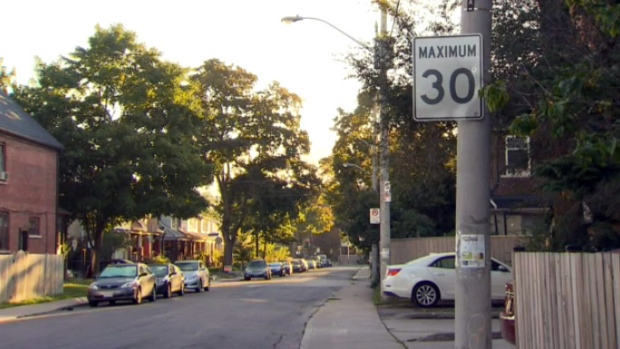 Speed limits will be reduced from 40 km/h to 30 on residential roads in East York and downtown Toronto, starting with Ward 22 this week.

Coun. Josh Matlow, the representative for Ward 22 St. Paul’s, told reporters Monday that 40 km/h signs will be replaced by 30 km/h signs starting in his ward.

Ward 22 is bordered by Eglinton and Broadway Avenues in the north, Spadina Road to the west, Macpherson Avenue and Southvale Drive to the south and Yonge Street and Bayview Avenue to the east.

The new signs will then be rolled out across the rest of the affected areas over the next year. The changes will affect 387 kilometres of Toronto roads in 12 wards, and will cost the city approximately $1 million. Limits in York, North York, Etobicoke and Scarborough will not be affected.

The speed reduction was unanimously approved by the Toronto and East York Community Council in June, but was proposed more than a year ago by Matlow.

In August 2014, Matlow suggested lowering the speed limit in residential areas after a six-year-old girl was fatally struck by a vehicle in Leaside.

At the time, Matlow cited a 2012 report from Toronto Public Health which suggested that pedestrians are eight times more likely to die as a result of a collision involving a vehicle going at 50 km/h compared to a collision at 30 km/h.

Studies suggest that a pedestrian has a 90 per cent survival rate if hit by a car travelling 30 km/h. That rate drops to 50 per cent if the car is travelling at 45 km/h.

This article can be found in its original form at http://toronto.ctvnews.ca/speed-limits-to-be-reduced-to-30-km-h-on-some-toronto-streets-1.2561999