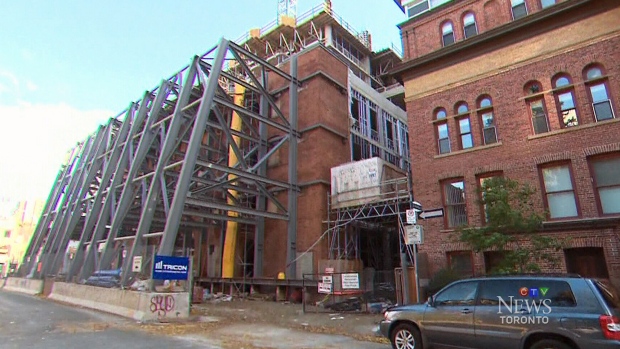 As new condos continue to pop up all over Toronto, a new report finds that a large number of buildings across the city have been left uninspected by city officials.

In Toronto, contractors are required to schedule regular inspections with city building inspectors during various stages of construction. During that time, the city issues an “open” building permit.

Once a city inspector confirms the completion of a construction site in accordance to city laws, the permit is closed.

According to the Audit Committee report, two-thirds of open building permits across Toronto remained uninspected for over a year.

Furthermore, over half of these permits had not had an inspection in the last five years.

Josh Matlow, vice-chair of the Audit Committee, told CTV Toronto that those kinds of numbers are simply unacceptable.

“I think that it’s a serious problem. We’ve got thousands of open violations, many of them could be safety hazards,” he said.

The report notes that many violations are not followed up or monitored in a timely manner.

In 2012, there were more than 3,700 open violations awaiting review from the city, with some violations dating as far back as 1999.

Matlow warns that outstanding building violations could pose a threat to residents across the city.

“There’s always a concern that if there’s a violation and something’s not built to code, that there could be an accident,” he said.

Ann Borooah, Chief Building Official, says city inspectors currently respond to the most high-risk safety cases first and insists there is no danger to Toronto residents.

“That doesn’t necessarily mean there’s a safety risk. In fact, our view is that there isn’t a safety risk at the present time on any of those properties,” Borooah said.

Mayor Rob Ford said he was concerned by the report’s finding and was working to determine the cause of the delays.

“We’ll get to the bottom of it. It’s disturbing when I hear stuff like that, but I’m doing everything I can,” he told reporters Friday.

The city’s audit committee has recommended a review of inspection policies and is calling on the building department to resolve dormant permits with unresolved violations.