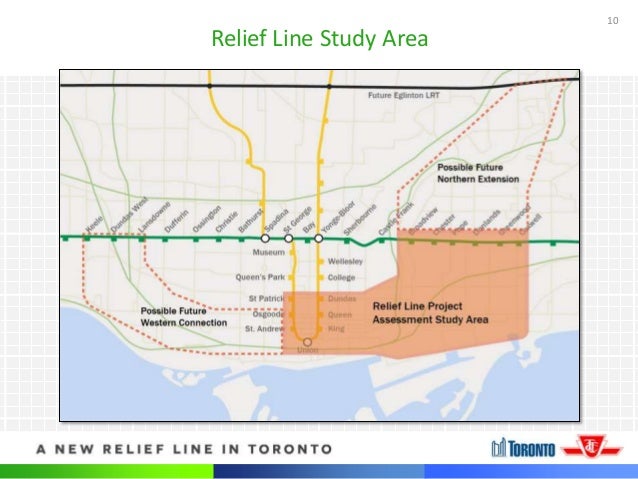 Yonge-Eglinton residents turned up this week to hear city officials discuss the progress of a study weighing options for a relief subway line.

The project has long been in demand as a way to ease congestion on the Yonge-University-Spadina subway line and would take at least eight to 10 years to build. That’s only after design and planning work is completed and the project receives the necessary environmental approvals from the province. There is also the matter of finding the necessary funding – last estimated at three billion dollars for the relief line’s first phase.

“We’re at the start of the process,” said the city’s transportation services director Tim Laspa who gave a presentation on the relief line study during Monday evening’s information session at North Toronto Collegiate which was organized by local city councillor Josh Matlow.

Laspa said the study had a timeline of approximately two years, during which all aspects of the relief line will be considered. A report is scheduled to be completed by early 2016 to present to city council for approval. Council must also sign off on the study’s timeline, which is expected to take place in June.

He said the project’s study area is focused on relieving pressure at Yonge-Bloor station with the first phase of a relief line to be built somewhere along the Danforth to as far south as St. Patrick Station, with plans for future expansion west and north. Chief city planner Jennifer Keesmaat told the approximately 75 people in attendance – including mayoral candidate frontrunners Olivia Chow, John Tory, Karen Stintz and David Soknacki, as well as Ari Goldkind and Morgan Baskin – the project is making significant progress despite being in its early stages.

“I can tell you we’ve never had this kind of momentum before,” said Keesmaat.

Matlow, who has supported building the line, said he was happy to see the study proceed, but hoped the line will eventually benefit his residents who he said must wait for four or five trains during rush hour.

“While it’s great Yonge-Bloor is being prioritized, midtown residents want to know they’re part of the priority too,” he said.

Christopher Thompson said he avoids the subway as much as possible despite living just seven blocks away from Davisville Station due to overcrowding in the mornings, which makes it impossible to get on a train.

“All of these great plans (for a relief line) are not going to alleviate the problem of getting me downtown to go to work,” said Thompson.