The Toronto Star: Tory, Wynne dig in on Scarborough subway despite money and ridership concerns

The Toronto Star: Tory, Wynne dig in on Scarborough subway despite money and ridership concerns 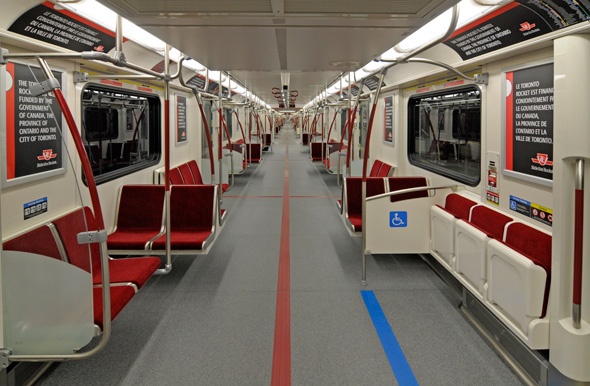 Premier Kathleen Wynne and Mayor John Tory (open John Tory’s policard) are digging in on plans to build the Scarborough subway, despite growing concern about a lack of evidence to justify the $3.56-billion plan.

The leaders’ unwavering support as they stood side by side at a Queen’s Park news conference Wednesday morning, has drawn criticism that the subway plan — which will cost at least $2 billion more than the light-rail alternative — is a political gambit not based on sound planning policy.

“My support for this was predicated on the notion that I think people want to see us move ahead and actually do something,” Tory said after meeting with Wynne to discuss various city issues.

When asked whether the public can be confident when earlier justification for the subway was based on analysis deemed “problematic” by the city’s top planner, Tory said all three governments have already made their decision — one he called “carefully considered.”

“On the basic decision of whether or not we’re going to have a subway in Scarborough . . . that train has left the station.”

Despite on-the-ground subway work still being years away from starting, Wynne, for her part, agreed she wants the debate to be over.

“I’d like to see us move forward as opposed to relitigate decisions we’ve already made,” she said.

For the first time this term, that fight will be centre stage on the floor of council in the fall, when the city must decide where exactly to build the subway. At the same time, councillors must contend with whether Tory and the province’s own plans to build a heavy-rail SmartTrack line will interfere with the subway.

Of key concern for subway critics is the sudden jump in the projected riders in Scarborough, from 9,500 to 14,000 — a number that was used in 2013 to just barely justify the need for a subway. The city’s chief planner, Jennifer Keesmaat, earlier told the Star those numbers were provided to council after a rushed planning process that didn’t allow for due diligence.

Many of those now pushing for the subway, including Tory, once supported the rationale for an LRT.

But the votes on Scarborough transit aligned with the upcoming municipal election and crucial byelections for Wynne’s government.

At that time, the TTC’s chair Karen Stintz, an LRT advocate turned staunch subway supporter, was planning to run for mayor against incumbent subway champion Rob Ford (open Rob Ford’s policard). Councillor Glenn De Baeremaeker (open Glenn De Baeremaeker’s policard), who also backed the LRT, changed his pitch as he faced re-election in his Scarborough Centre ward. He has since been named Tory’s subway champion and a deputy mayor.

In the provincial race, Liberal Scarborough MPP Mitzie Hunter asserted herself as a “subway champion” — a slogan plastered on red and white lawn signs that year — to narrowly win a close byelection battle in her Scarborough-Guildwood riding.

Even Ford himself, before 2013, had signed a non-binding memorandum of understanding with the province that included not a subway, but an LRT for Scarborough.

Today, a master agreement between the city and Metrolinx, the province’s transit arm, that includes the LRT remains in place.

In October 2013, council told then-city manager Joe Pennachetti, who has since retired from that post, to negotiate with Metrolinx to change that agreement and redirect the province’s promised $1.48-billion contribution to the subway. Those negotiations are ongoing.

When Wynne’s government pledged its full contribution for the subway, but promised no additional funds, it left the city to make up the difference. As a result, council approved a special tax for all residents to fund the subway while the federal government agreed to kick in $660 million.

That federal money, according to Infrastructure Canada, was set aside as part of the province’s share of what’s called the New Building Canada Fund, of which there is a total $2.7 billion available to the province for major projects, including public transit.

That money, Infrastructure Canada spokesperson Fatima Baalbaki said, is conditional on the province and the city identifying the subway as a priority for funding, meaning if the city and province decide not to build the subway, the money potentially could fund other priorities.

“If we’re to make a fact-based decision, we know that the regional express rail, the relief subway and expanding rapid transit to more Scarborough residents with an LRT are Toronto’s top transit priorities,” said Councillor Josh Matlow (open Josh Matlow’s policard), who since 2013 has led inquiries into the justification for a subway. “I respectfully disagree with the conclusion that the mayor has arrived at. Just because all three level of government have chosen to ignore the real priorities and invested in the wrong plan doesn’t make it the right thing to do.”

Council voted 24 to 20 to endorse the subway in October 2013, but now it’s not clear where all of the allegiances lie — especially with new faces around city hall.

But most of the seven new councillors elected this term appear to have adopted Tory’s stance on the subway: that what’s done is done.

Sources have told the Star that Tory has privately worried about alienating Scarborough voters who have demanded a subway, with Ford vowing to run again for the mayor’s chair in 2018. Ford’s unrelenting rhetoric that Scarborough deserved a subway proved an effective rallying point in a city that remains divided across old urban and suburban lines.

Tory’s office did not respond to a request for comment on that claim.

Nick Kouvalis, the pollster who helped get both Ford and then Tory elected mayor, argued the fight is “over” when it comes to the subway. He pointed to the overwhelming majority of Toronto voters who picked a candidate who campaigned on the subway — both Tory and Doug Ford — over top contender Olivia Chow, who backed the LRT.

Downtown Councillor Gord Perks (open Gord Perks’s policard) said he believes a fear of Ford Nation has proved influential in the past.

“I hope John Tory has the courage to stand up to him.”