Last week, City Council debated how to engage with the Province with regard to Doug Ford’s proposed upload of our subway system. In a report to Council, the City Manager recommended that Toronto start a process to share information about the subway, including property holdings, with the Province.

While I’m pleased that Council voted in principle to support our interest in keeping the subway, along with its valuable land and air rights, in the hands of Torontonians, I am disappointed that Council supported moving ahead with the province’s imposed discussions about handing over our subway network. Premier Ford stated that his aim in this initiative is to ostensibly build rapid transit faster and create a more seamless commute from the 905. A more logical starting point for discussion is to pursue those stated aims.

That’s why I moved a motion to engage with the Province on terms that both parties can agree to move forward on:

1. City Council authorize the City Manager, in consultation with the Chief Executive Officer, Toronto Transit Commission to guide a discussion and information exchange process between the Province and the City to further the Province’s stated transit objectives, specifically:

a) more efficient and cost-effective construction of rapid transit projects; and

b) improved regional transit service across the Greater Toronto Area.

Unfortunately, my colleagues chose to share information with the province about uploading; accepting a premise that we have already rejected.

As I wrote to you in my e-newsletter earlier this month, I suspect that Premier Ford’s motive for taking over the subway system is to gain control of the lucrative air rights, and adjacent properties, owned by the TTC. If we lose control of the subways we risk losing control of transit planning, the connection between our surface routes and subways, as well as opportunities to build needed public amenities including affordable housing on public land.

I will continue to advocate for Toronto’s existing subway network to remain under the control of the residents of Toronto who own and paid for them.

There has been a great deal of confusion surrounding the Federal government’s move to legalize marijuana. Several years ago, almost 100 marijuana dispensaries opened illegally in Toronto after the announcement was made ahead of the October 2018 legalization date.

The federal government gave control of licensing and distribution of cannabis to the provinces. In Ontario, the previous government initiated publicly-controlled outlets based on the LCBO model. As many of you know, the current government scrapped the plan and announced that pot sales would be private.

Doug Ford’s government gave municipalities a choice: either allow private marijuana retail locations with no restrictions on locations or not allow any sale of marijuana at all. Many cities across the 905 have already said no to cannabis sales under these conditions.

I do not believe that either option is suitable for Toronto. That’s why I moved a motion at Council last week to have City staff look at the feasibility of adopting the previous provincial government’s more responsible public retail outlet plan for Toronto. This initiative had the potential to provide us with more control over the number and placement of the retail locations, as well as providing revenue to support childcare, housing, transit, and other priorities.

Unfortunately, my motion narrowly lost. Cannabis retail stores will be legal as of April, 2019.

Toronto is becoming increasingly unaffordable for far too many residents. A report by the City Planning department that I requested as Chair of the Tenant Issues Committee found that rents for available units were over $1,800 a month in September 2017. Rents are no doubt higher now as Toronto’s vacancy rate is still below 1% .

“Diversity our Strength” is in danger of becoming a hollow motto if these trends continue. Earlier this year, I requested a comprehensive, cross-divisional strategy be developed to look at ways of making housing more accessible for all tenants because we are stronger when seniors, new immigrants, artists, and students are able to live in our city.

In the meantime, the City needs to move forward by using as much of our land as possible to build new affordable housing. That’s why I commend Mayor Tory for starting off the new term of Council by fast-tracking 11 surplus, City-owned sites for below market rate rentals.

One of the sites is a former works yard at 140 Merton in Toronto-St. Paul’s. The low-rise building on the site is currently home to SPRINT senior’s services. The redevelopment will provide needed affordable housing in our community, and expanded facilities for SPRINT and other social service organizations. However, this redevelopment will still be subject to a meaningful public planning process to ensure that the built form is appropriate for the site and respectful to the community.

Vision Zero: Advocating for Road safetyVision Zero is a globally recognized strategy to eliminate road fatalities. Over the past decade, jurisdictions from across the world have adopted the principle that no loss of life is acceptable on our streets and successfully implemented measures that have either greatly reduced, or eliminated road fatalities. Since council’s Vision Zero Road Safety Plan was adopted in 2016, there has been no discernible reduction in deaths or serious injuries caused by collisions. Toronto is falling flat on its commitment to making our streets safer and we must do better in 2019.

Last week, council adopted a number of recommendations to accelerate the implementation of Vision Zero, including enhancing the school guard crossing program, allocating a greater portion of the budget, expediting traffic calming, better data collection and restating my motion to implement a school safety zone at every school in the city by the end of 2019. While these actions demonstrate a commitment by council to work towards a Vision Zero plan, we need to take a holistic, evidence-based and bold approach to make our streets safe.

Initiatives like Transform Yonge use Vision Zero policies to completely redesign our streets so that all road users are prioritized, need to be embraced by council rather than rejected based on a negligible inconvenience to one road user.

I continuously hear from residents who are understandably frustrated and cynical about any meaningful initiatives to make our streets safer due to lack of enforcement by Toronto Police Services. That is why council overwhelmingly supported my request to the Police Board to provide enough resources to adequately enforce the Highway Traffic Act (for example, there are only two traffic cops in the entirety of 53 Division), accelerate the design of safer streets, and to also reduce speed limits across the City’s neighborhoods to better align with the Road Safety Plan.

This year, I will continue my commitment to advocate towards a real road safety plan that looks at the issue holistically through improved design, enforcement and education both locally, and across our city.
Community Safety: Car Break InsThere is nothing more important than the safety of our community. I’ve requested a meeting with 13/53 Division Superintendent Narine to focus our local police-related priorities and plan a town hall discussion for our community in the new year. I’ve directly expressed to the police the fear and vulnerability people feel when they don’t know what to expect every morning when cars are being broken into, along with the financial cost of those victimized by this kind of crime. I cannot stress the importance of reporting any incidents directly to the police. You can do so online at: https://www.torontopolice.on.ca/core/ or my telephone at 416-808-2222. If you wish to remain anonymous, contact Crime Stoppers at 416-222-TIPS(8477) or online at: www.222tips.com
UPDATE- Metrolinx/Crosslinx Proposed Closure of Bathurst and Eglinton Like many of you, my office received the Metrolinx/Crosslinx notice of a December closure of Bathurst Street at Eglinton Avenue.
I was surprised by, and frankly upset about their announcement, as they had not received a permit from the City of Toronto to do this. However, we have confirmed that Metrolinx/Crosslinx will not go ahead with their proposed closure without a full and complete public consultation with the residents in our community. I believe consultation should come before, not after, announcements of a decision.

While Metrolinx/Crosslinx has stated that the closure could shorten the construction at Bathurst and Eglinton, there is no evidence that this will speed up the Eglinton Crosstown LRT completion date. Moreover, there are significant concerns about the bus detours, and traffic infiltration into neighbourhoods this closure could cause, further exacerbating the situation residents are already living with every day.

I am working closely with my colleague, Councillor Mike Colle and Mayor Tory’s office, and together we have urged Metrolinx and all parties involved to move the consultation process into January (rather than over the holidays) and to offer alternatives to their proposed closure of Bathurst Street for the public to review. Once an exact date and location of this meeting are made available, they will be posted on their webpage.

Please join me to discuss the proposed development on:

If you have any questions or comments, or are unable attend the meeting you can contact the City Planner Danny Brown at dbrownj@toronto.ca

Do you have an idea for an event or for programming that will engage and benefit the surrounding neighbourhood? The Wychwood Barns Community Association (WBCA) is now accepting applications for community-focused events to be held at the Artscape Wychwood Barns. These microgrants of up to $2000 want to make the barns a place for all by welcoming in new groups and communities to the barns.

Deadline for next submission is January 31. For full details and to submit a grant application at https://docs.google.com/forms/d/e/1FAIpQLSdzrxuuf2ZgZCsdGp0G_0wsXvFBHJ2ewYakFivVwvk_DD9uvw/viewform

Farewell and Congratulations to Blake Webb!I know many of you have had the opportunity to know my assistant, Blake Webb for many years.

Since I was first elected to city council, Blake has been there with me supporting our community. His professionalism, caring approach, ability for problem solving and tireless dedication to helping people was appreciated by everyone he served.

Blake has been an integral member of my office and continues to be a dear friend. We’ve shared a passion for public service and have watched our children grow up together.

While we’re going to miss him here in Toronto-St. Paul’s, I’m happy to share with you that he has accepted a position with Transportation Services, as a Transportation Standards Officer and I know will be a great new addition to our city staff.

On behalf of us all, I wish Blake my very best wishes on his new role as he continues serving the residents of our city. 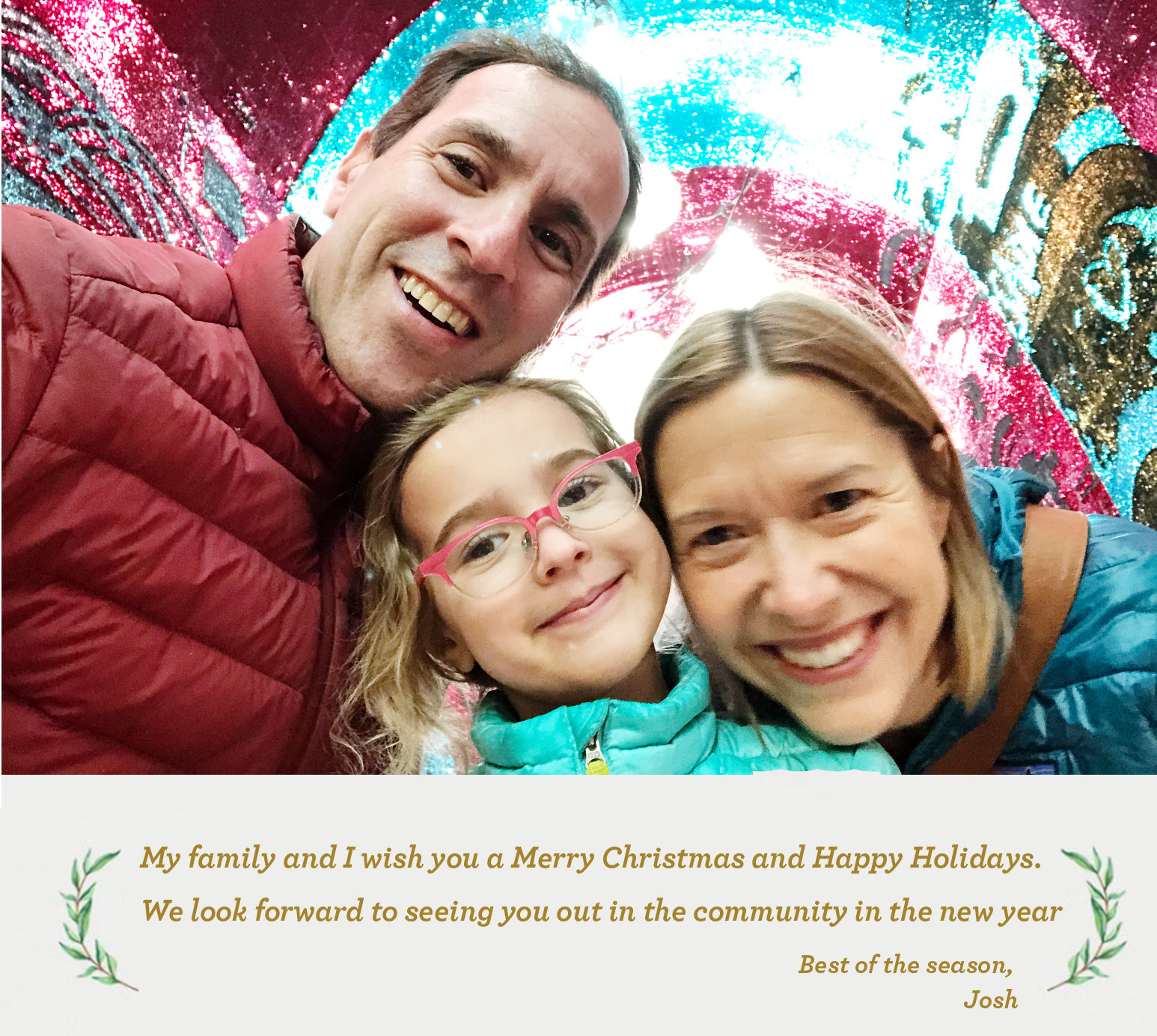