Toronto – The long-awaited RentSafe signage program has been released by City Staff. The apartment building rating system, similar to the City’s “Dinesafe” program, will require landlords to post a colour-coded sign that displays the City’s rating in a prominent, publicly identifiable location, along with posting the same information to the City’s website.

“RentSafe signage has the potential to contribute to Toronto’s renters living in homes that are clean, safe, and healthy,” said Councillor Josh Matlow, Ward 12 Toronto-St. Paul’s. “The new colour-coded rating system is an important first step, but must be more flexible to reflect residents’ actual day-to-day experience and hopefully the progress made by landlords to improve the quality of life of their tenants.”

As Chair of the City’s Tenant Issues Committee, Councillor Matlow led the creation of the RentSafe program, which resulted in a majority Council vote in 2017 for stronger legislation to protect renters in Toronto from bad landlords. The colour-coded signage was a key component of these new protections. Tenant support organizations including ACORN and the Federation of Metro Tenants’ Associations (FMTA), Advocacy Centre for Tenants in Ontario (ACTO), and community legal clinics have long advocated for the rating system to be implemented. 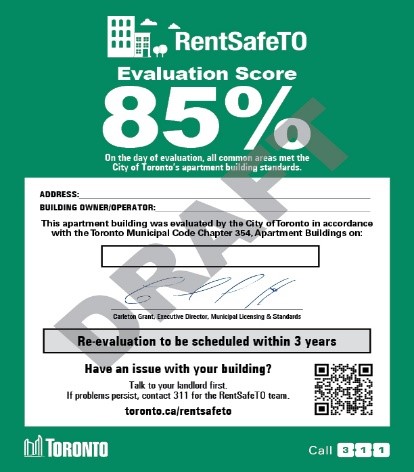 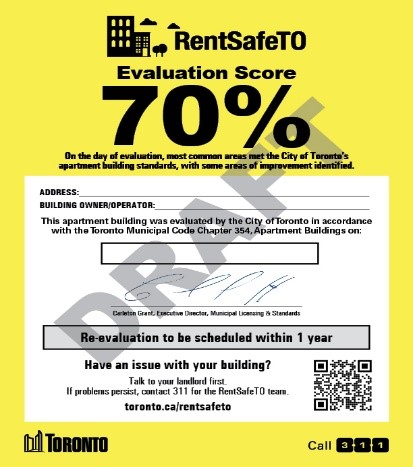 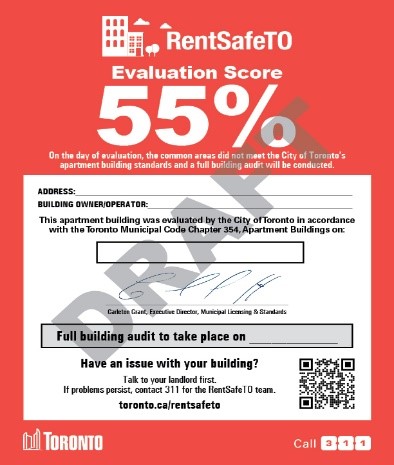 The City released draft signage (shown above) for the rating system through an online survey as part of the consultation for the program. While the colour-coded system follows the successful display of the City’s DineSafe program, there are concerns with the proposed evaluation method. The draft signage program would be based on annual audits instead of regular work orders, which would provide a more up-to-date reflection on the state of a building.

“ACORN is pleased the City is finally creating rating signs for buildings, but we also wonder why it is so difficult for them do it right for tenants. We are half the population, and our health needs to be a priority,” said Alejandra Ruiz Vargas, Toronto ACORN. “If the rating system only changes every 1 to 3 years, then the city is not responding to the needs of tenants. ACORN members will be pushing for a system tenants can trust. The city needs to be a good partner and rebuild trust with tenants so we can all have a healthy home.”

“Tenants have been waiting patiently for this initiative for five years,” said Geordie Dent, Executive Director, FMTA. “This proposal falls way short of what tenants expected and deserved.”

Councillor Matlow and tenant advocates are requesting that the rating system is based on current property standards violations in apartment buildings.

Councillor Matlow and tenant advocates are encouraging the public to attend a drop-in consultation session at City Hall on February 24 to discuss the proposed rating system and provide City Staff with feedback.